The Phillies are an aging team coming off a down year. However, they should in no way be written off heading into the 2013 season. In fact, the health of Ryan Howard, Chase Utley and Roy Halladay should be the best it has been in years in theory. They are a mostly veteran club with a few youngsters knocking at the door. The plus of veteran players when it comes to fantasy baseball is that they usually come at a discount on draft day. Yet, they tend to outperform the "hot young prospects" in single year leagues who get drafted rounds before them. The downside of aging stars is they can miss chunks of time with injuries so you must have a deep bench if you are going to roll out a veteran squad. 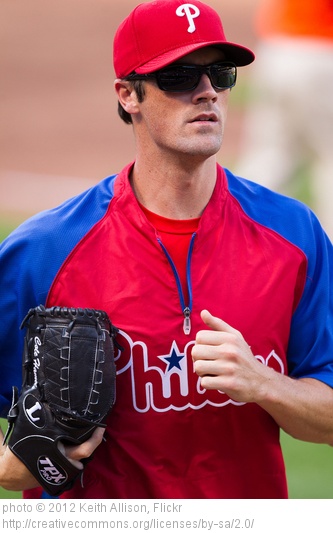 ROTATION:
In this year's FANTASY BASEBALL BLACK BOOK 2013 I presented a significant analysis of Roy Halladay and whether or not he had anything left in the tank. The closest comparable was Greg Maddux who was just as dominant as Halladay, but once he turned 36 never posted another ERA under 3.96. Despite the injury and the down season, I don't believe Halladay is "done". I do think his time as a fantasy ace has likely come to a close. His draft stock has fallen way below what it should be and I expect a competitor as ferocious as Halladay to bounce back to within reach of his old self. Take advantage of the buy low opportunity, but as a strong #2 starter, not a rotation anchor. His keeper days are numbered. Cole Hamels is now the Opening Day ace of the Phils, and he has earned that right. He posted career highs in wins (17) and strikeouts (216) as well as great ERA and WHIP numbers. He is in his prime and a true fantasy ace. Cliff Lee had about as bad of a run of luck as any pitcher in recent memory. When your K/BB ratio is 7 to 1 you should be winning more than 6 games. All his peripherals are sparkling and like Halladay he will be undervalued on draft day. Lee is still worth a hefty price as a #1 guy and he could even slip into a #2 role if you get lucky. Kyle Kendrick made progress with his K/9 rate (finally a serviceable 6.6) and if he at least holds onto that he could be a match play in NL only leagues or deep mixed formats. He is nothing special in fantasy terms so he can be left to the waiver wire. Tyler Cloyd and John Lannan will battle for the 5th spot. Cloyd had some nice starts at the end of the year, but is still a bit green. Lannan spent most of the year in AAA with the Nats and is probably the better bet to break camp with the job. Neither is worth a spot in your rotation.

BULLPEN:
Jonathan Papelbon is the #2 closer in baseball behind Craig Kimbrel, but he is still miles behind him. I have him second on my board based on his solid secondary numbers, K rate and track record. He is the undisputed ninth inning guy and a lock for 30+saves in 2013.

OFFENSE:
The breakout season of Carlos Ruiz was too good to be true after all and he will miss most of April serving a PED suspension. Perhaps Ruiz is a stash if you miss out on a catcher run in your drafts. He should hit for a respectable average, but the power numbers will be anyone's guess. Ryan Howard was once a fantasy force, but that was when he was a 40/120 player. Now that he is more of a 30/90 guy, Howard's strikeouts are death in points leagues. He never really found himself last year, so if he has a strong spring it is an indicator he can be a fantasy low end fantasy first basemen in 2013 or a high end corner infielder. If his struggles continue, it could be a sign of lingering leg issues. Speaking of leg issues, Chase Utley finally got back on the field and miraculously was on pace for a 20/90/20 season over 81 games. If he could sustain that production, Utley will be a steal on draft day and he should be moved up on your board simply based on track record. Oh, and he is playing for a contract! Michael Young is a coin flip at this point. His production in hitter friendly Texas, fell off the map and he showed across the board declining skills. He has a fresh start in a new league and we have seen players left for dead rise from the ashes before. He doesn't carry enough power as a starter at third base, but he could be a useful at second base (16 games played last year) if he qualifies there in your league. Jimmy Rollins is what he is, and that is a .250/95R/20HR/30SB line. At shortstop that still puts him in the upper tier, even at 34 years old. He has streaky stretches, but overall his production is solid. The outfield is full of questions, but newly acquired Ben Revere will patrol centerfield. He has .300 BA and 40+steal potential, but posesses zero power. I tend to shy away from "specialized" players like Revere who contribute in one or two categories. Still, if he does lead off for the Phils, he will score close to 100 runs making him a points league player of great annoyance to your peers. You can peck your opponents to death with guys like Revere. The rest is up for grabs: Darin Ruf has prodigious power and is very intriguing sleeper in drafts if he wins a job. Domonic Brown has been underwhelming in numerous opportunities with the big club. Delmon Young's questionable glove will reduce his at bats and  John Mayberry is a glorified bench player. Ruf is really the only one worth your fantasy dollars due to his upside.

The Phillies have some guys that can still get it done and put W's in your fantasy team's column. Again, plan a deep bench for guys like Utley and Howard to be safe. Take advantage of Lee and Halladay being cheaper than usual and avoid the outfield for the foreseeable future.
Posted by Unknown at 9:02 PM