After a number of years of undisciplined front office decisions and ownership question marks, the Mets seem to have finally found a steady hand in Sandy Alderson at the helm. The Mets' GM is committed to rebuilding the organization from the inside out. By dealing off R.A. Dickey and Carlos Beltran he was able to bring back big time prospects while continuing to reshape the team concept. He has also shown the fortitude to allow overpriced players to move on that did not fit the vision of the future or passes on mid-level free agents who would  just be window dressing to appease the masses. The toughest part is convincing a New York fan base to wait for better days. Met fans historically are more patient then their cross town rivals, but Citi Field will still be barren most nights unless the prospects make an early impact. 2013 looks to be another tough transition year, but there may be some light at the end of the tunnel and some decent fantasy plays to boot. 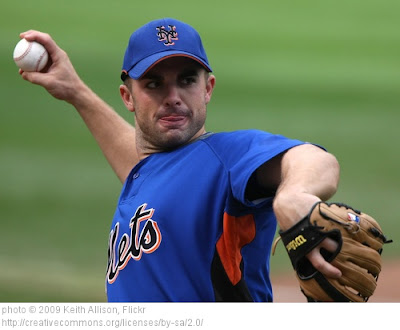 ROTATION:
Johan Santana finally gave the fans the first no-hitter in team history, but the workload of that evening and bizarre re-configuring of him back into the rotation afterwards threw him completely out of whack. It all resulted in another incomplete season for Santana, this time from a back injury. Before the break, Santana did pitch quite well (3.24 ERA in 102 IP 99K/33BB). If he is truly healthy with no restrictions in 2013 and can repeat those secondary stats, he may be a prime candidate to be moved to a contender. That would be a boon for his value. Roto players beware, as long as he is a Met, the offense and bullpen will limit his wins. Draft Santana as a back end of the rotation starter with upside. He should come at a very low cost considering his injury history and the lack of excitement surrounding the '13 Mets. The biggest bright spot for the 2012 Mets rotation was Jonathan Niese. In his 25 year old season, he posted a career low (3.40 ERA), Hits per 9 (8.2) and walk rate (2.3 BB/9); while maintaining a strong K/9 rate of 7.3. There is a lot to like here and Niese is your classic slow developing lefty. If he can build on last season or at least hold strong, he will be a highly underrated fantasy arm at a significant discount. Shaun Marcum is your prototypical middle of the road fantasy arm. When he takes the mound he is double digit wins, a 3.75 ERA and a 150/60 K/BB ratio. Marcum's numerous arm injuries have prevented him from taking the mound at times and he has only reached the 200 inning mark once in his career. He brings more risk than usual, but is worth a late pick as fantasy rotation depth. Dillon Gee's season was cut short by a blocked artery in his pitching shoulder, but before the injury he showed marked improvement. He cut his walk rate in half, raised his strikeout rate and lowered his WHIP and ERA. Gee will have almost zero airtime in fantasy circles, but he could be a spot starter/match-up play. Gee is a sneaky good late round pick. Matt Harvey is a very strong your strikeout pitcher (9.8 K/9 in the minors), and his success carried  over in his 10 starts with the Mets. Like most young pitchers, he will experience some bumps in the road especially when you consider his high walk rate (3.9 BB/9). When you walk too many guys in the big leagues, it is tough to be successful. Number one pitching prospect Zack Wheeler should make an appearance at some point during the 2013 season as well. He has all the earmarks of a front line starter and strong secondary stats to back it up, though like Harvey he needs to reduce his walks. Both he and Harvey are nice keeper league investments with limited upside in 2013.

BULLPEN:
If you think Frank Francisco is going to get saves you are wrong. Brandon Lyon is the guy to invest in here as a RP2 in fantasy leagues. He is not the greatest option, but he does have experience and that counts for something. Bobby Parnell has proven he can't handle the closing duties, so Lyon is your man.

OFFENSE
John Buck is a placeholder for top catching prospect Travis d'Arnaud. d'Arnaud projects as a Buster Posey-type offensive catcher with good average and 25 homer power. He should make an appearance around the all star break. Offensive catchers are hard to find making him a great young keeper in deep leagues. Buck and his sub .200 BA have no fantasy appeal. Ike Davis had about as awful a first half as you can get (.659 OPS), but rebounded for a sparkling .888 OPS after the break. Davis is 100% healthy after dealing with Valley Fever last season. He is a 30/100 slugging first basemen, so you can stomach his .250 AVG. There is room to grown here and Davis is an under the radar long term fantasy investment. Average and doubles are great, but Daniel Murphy needs to get his home run total into double digits to have mixed league appeal. Murphy is a weaker option at an already weak position. He is serviceable in NL only leagues or perhaps a MINF in deep roto leagues. David Wright's contract extension was well deserved and he should continue to be a top 5 third base option in all fantasy leagues. He did have a big drop off in the second half (.351 BA/1.004OPS to .258BA/.750OPS) which is a slight concern, but he offers across the board production that is impossible to shy away from on draft day. Wright is in his prime (29) and could still have one or two big seasons left in him. Ruben Tejada simply does not hit enough for fantasy purposes. If he ends up in the lead-off spot he may get a small bump in NL only or very deep points leagues, but that is about all. Lucas Duda was a disappointing after being a fantasy "sleeper" heading into 2012. He has pop and is still young enough to figure it out. A late round flier bench bat for now, until he proves more. The time share of Colin Cowgill, Mike Baxter and Kirk Nieuwenhuis is worth monitoring on the waiver wire, but non should be drafted in fantasy formats. Cowgill has the best upside as he was once a top prospect in the D'Backs organization.

The theme here is simple, there are some under the radar value pays on the Mets roster and it would be wise to keep them on your radar. The upside for 2013 is limited, but if you are filling holes in the latter half of your draft the Mets have some bodies that can help.

For complete player profiles check out THE FANTASY BASEBALL BLACK BOOK 2013 EDITION on Amazon for Kindle and iPad.