You will often hear the phrase "spring stats mean nothing". The truth is they mean very little. However, it's not always the stats in the box score that can inform your fantasy draft. For instance, I watched a few innings of the Phillies vs. Astros game this morning and although it was nice that Chase Utley singled in a run, I was more interested in how he went from first to third. The answer to that question was, "quicker than I expected and seemingly without impediment." Utley has dealt with knee issues the last few years and if he is healthy could be a steal in your fantasy draft. That kind of information doesn't not show up on the crawl of your favorite sports outlet. It does however matter and can change your perspective on a player. 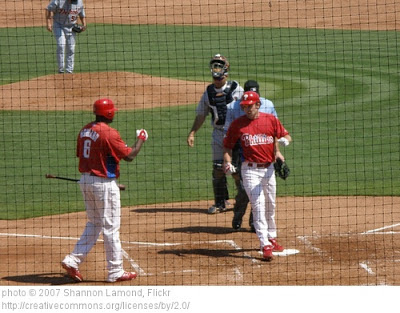 Here are five keys to successfully monitor spring training from a fantasy perspective:

1) Inferior Competition When players like Ryan Raburn burn up the stat line every spring but fail when the calendar turns to April, the answer is simple. They are facing mostly inferior talent. Spring training is littered with minor league players getting their feet wet and spring "invitees" who are well past their prime. Therefore, a spring batting average of .380 with 7 homers does not necessarily lead to a breakout year from an unheralded player. It means 9 times out of 10, that player is feasting off of less than Major League caliber competition.

2) Players Returning From Injuries Spring is crucial for players heading into the upcoming season with injury concerns. There are many who had off season surgeries (ex. Ryan Zimmerman's shoulder procedure) or players who's previous season ended with injury questions such as Matt Garza. This is the time where you can see whether or not they are uninhibited by their ailments or if they are continuing to lose the battle with their own bodies. Garza has already dealt with elbow and lat issues in the first few weeks of spring after ending 2012 on a sour note with an elbow stress reaction. For you to make informed decisions on these players, you must read local coverage of these player's teams or try if you can to see highlights of their performances (if you are unable to see full video). We live in a great technological age and you must use it to your advantage when scouting your fantasy roster. At the very least you can follow up on the players you are personally targeting before making an investment on draft day.

3) Bad Spring Stats Mean Nothing for Established Players When Clayton Kershaw has a stat line of 4IP 4ER 3K 2BB there is absolutely no reason to panic. When it comes to pitchers of note, most of them are using spring to work on their mechanics, a specific pitch or just shake the dust off from the winter. You should not be concerned with any bad outings, even multiple bad outings. A few years ago Zack Greinke had a frighteningly awful spring and it caused his draft stock to tumble. Well, I took advantage of that fact and he went onto win the Cy Young that year. In fact, you can even target a pitcher or two having a bad start and try to nab them a round or two later than normal. Same goes with established hitters. As long as everyone is rounding into form the last week of spring all is well.

4) Position Battles Spring is often a place for position battles and in these instances stats do matter more than any other. When it comes to winning a job or avoiding a platoon these few weeks are crucial. Monitoring them closely can give you a leg up in the later rounds of your draft. If your league drafts early you can be at a disadvantage in these situations so it may be best to avoid them when you can.

5) Young Talent This is the time when organizations give their prospects a good long look, but just keep in mind key #1 on this list when you look watch them. Every now and then young players break camp with a starting job, but in the modern financial baseball world that is becoming a rarity. It is more likely these players  who succeed and have little competition blocking their progress, will probably be called up June and thereafter. Their spring performance is a good indicator of where they are at in their development and is especially important in leagues with minor league slots. Just don't overrate them too much in one year only leagues.

Keeping an eye on spring training can be very useful, but keeping spring training in its proper place is paramount. It means more to some players than others and you must properly weigh that when evaluating performances heading into your draft. For more fantasy baseball insight and philosophy check out THE FANTASY BASEBALL BLACK BOOK 2103 EDITION on Amazon for iPad and Kindle.
Posted by Unknown at 8:10 AM