The only thing more fun than watching this young Nationals team play might be the Presidents' Race that runs every home game. Stephen Strasburg, Bryce Harper, Gio Gonzalez and Jordan Zimmerman are all big young fantasy names, but it was Davey Johnson's uncanny ability to steer them in the right direction while getting the most out of veterans like Ryan Zimmerman and Adam LaRoche that took the Nats into the 2012 playoffs. The Nats are ready to take off in an NL East and they offer an abundance of keeper talent, solid producers and even a few sleeper candidates. 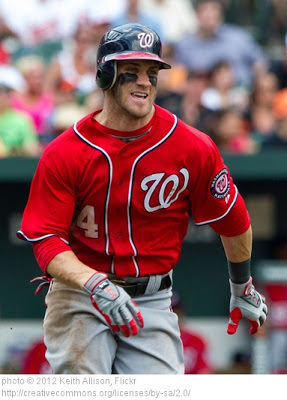 ROTATION:
There is no better strikeout pitcher in the game than Stephen Strasburg. He does come with significant risk, but in his second full year removed from Tommy John Surgery he should be clear to finally throw 200 innings which should easily result in 250K's a sub 3.25 ERA and a WHIP under 1.20. Now it is likely he will fade down the stretch this year once he crosses the 160 inning mark. Just because he is enormously talented does not make him immune to the same pitfalls as other young starters. In one year only leagues you may even explore dealing him in August before your playoff run. It is not as crazy a notion as you may think. He will certainly have great numbers and may bring back a wealth of riches that would put you over the top in your championship hunt . In keeper leagues, you obviously will hold onto him and take your lumps if necessary in September. Pitchers with this kind of early dominant arc at such a young age are names like Mark Prior, Kerry Wood and Dwight Gooden. All of them have been long term let downs so keep that in the back of your head as well. Gio Gonzalez proved the NL switch is a pitcher's dream (and a fantasy owner's as well). Gonzalez won 21 games, posted the lowest walk rate of his career (3.4) and his best WHIP (1.13). There is no reason to think he can't repeat those numbers. Still, I prefer him as a #2 starter in mixed leagues if you can draft him there simply based on the fact '12 was his first ace-like season. Jordan Zimmerman is about as underrated as a young starter can get. In 32 starts he was "quality" in 24 of them. His 2.94 ERA and 1.17 WHIP should have led to more than 12 victories. If his K/9 ever improve over 7.0 he could become a fantasy ace, but for know think of him as a top middle rotation arm. Dan Haren has been a fantasy stalwart until last season when a bad back ruined his season. He is on a one year deal and his stock has fallen way past where it should be in mock drafts. Haren is a steal if his ADP continues to trend downward. Before last year, Haren was a #2 fantasy starter, and now that he is in the NL it would be shocking if he did not bounce back. Check him out this spring to see if he is healthy. Ross Detwiler pitched over his head last year and his lack of strikeouts makes it difficult for him to sustain a solid ERA. He has some value as a match up play in NL only leagues, but I would avoid him in mixed formats.

BULLPEN:
Rafael Soriano parlayed his 2012 "Mariano Rivera impersonation" into a 2 year deal with the Nats to be their closer. He posted excellent secondary numbers and is an above average fantasy closer. Tyler Clippard and Drew Storen both have proven worthy of the role as well, but for now are relegated to holds. In leagues that reward middle men, they are both valuable.

OFFENSE:
Kurt Suzuki improved when he was dealt to Washington (.725 OPS which is above his career average. Wilson Ramos figures to cut into his playing time, making them both less than desirable catcher options in fantasy. Adam LaRoche had a career year (33/100) in '12 and he is locked into the middle of the Nats batting order. He will continue to drive in runs but his strikeouts make him a better roto play as opposed to points leagues. LaRoche will be one of the cheaper power threats on draft day from a corner spot. If you miss out on the big guys you could do a lot worse. Danny Espinosa is battling a rotator cuff injury and a penchant for swinging and missing. His K rate is so bad that it destroys his points league value. His power and speed play better in roto formats, but the lingering health questions make him a complete roll of the dice. What a difference a cortisone shot made for Ryan Zimmerman. Once he received one in his ailing shoulder he became the slugging third basemen we remembered. He is a top 5 guy at the position if healthy and certainly a 100/30/100 season is well within his grasp. I would overpay slightly for him in 2013. In the shadow of the other young Nationals talent, Ian Desmond had a breakout season. Despite missing a chunk of the season on the DL, Desmond was consistently productive every month and is a real 25/25 threat at a tough position. This may be the last time you get him at a discount. Jayson Werth's .300 average was a nice surprise, but his power was slow to return. He is a bargain power/speed combination later in your draft and if this new found contact rate holds he could even have a career season. Denard Span is hoping to regain his 2009 form and as a the Nats new lead-off man. He should be a safe bet to score 100 runs if he plays 150+ games. Though he posses above average speed he has never stolen more than 26 bags in a season so temper those expectations. Runs and average are his bread and butter, anything more is a bonus. Then there is Bryce Harper whose age 19 success is completely unique in the history of the game. His debut was better than Ken Griffey Jr. or A-Rod and is closer to Mel Ott/Ty Cobb quality production the likes of which we have never seen in modern day baseball from a teenager. He is certainly capable of growing into a 30/30 player in the next three years and is in my opinion the young offensive fantasy keeper (yes, even better than Mike Trout, but you will have to read THE FANTASY BASEBALL BLACK BOOK for that breakdown). He will no doubt have some adversity along the way and his reaction will be interesting to see. As great as Harper is, he is not yet an elite outfielder and he may be overrated a bit in single year leagues based on hype. He is a tough, gritty, fun, intense player to watch and a terrific fantasy pick. Just be sure you draft him at an appropriate value, otherwise you run the risk of asking a 20 year old to carry your offense and that is never wise.

The Nationals are going to be a productive and competitive club in 2013 and those ripple effects will be felt in your fantasy league. The key here is health and progress from both the young and old alike. If everything breaks right and they could be poised for a special season.
Posted by Unknown at 8:34 PM