We all know spending enormous amounts of cash does not always equal wins. We have seen time and time again teams go on spending sprees that energize their fan base, only to fall sort of expectations. Worst of all, the players tend to be over hyped in the media which leads to inflated fantasy values. The Dodgers are probably the prime example of this gluttony. For as much talent as they have, there are nearly as many questions which could make this situation quite volatile. 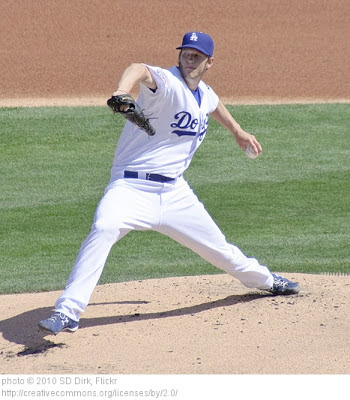 ROTATION:
If you asked me to name the one National League pitcher I would want in 2013 or keeper league, hands down that man would be Clayton Kershaw. At 25 years old, he is already pitching like a veteran in his prime. Kershaw battled a hip injury at the end of last year, but all reports on his health are good heading into spring training. His numbers are off the charts. You can expect: H/9 around 6.7, an ERA under 2.75, 220K's, and a WHIP hovering around 1.00. It is frightening to thing he may have another gear in him. I would draft Kershaw over Justin Verlander or Stephen Strasburg in keeper leagues. He is younger than Verlander by a wide margin and has proven more durable than Strasburg. Zack Greinke signed an exorbitant contract with the Dodgers and is certainly a candidate for the classic "big contract pressure/bad performance". Add in his history with anxiety issues in a big market and Greinke could be disastrous fantasy investment. Even at his best Greinke is more of a 1A starter than a true ace. He will have ace-like performances, but he will also throw in some clunkers that will hold back his overall value. I would tread lightly with him and only draft him if he fell beyond his ADP. Not as a #1 starter in fantasy. In 7 starts with LA last year, Josh Beckett looked reborn (2.93 ERA with the Dodgers). The switch from the AL East to the NL West would serve most pitchers well, especially an aging veteran. Beckett's stock has fallen so far that he actually profiles as a sleeper heading into 2013 drafts. If he can keep his K/9 rate around 8.0 he should be a nice value pay as a back end fantasy starter. The rest of the rotation is up for grabs. Korean import Hyun-Jin Ryu is unproven despite a career 2.80 ERA in his homeland and strong strikeout rates. Aaron Harang's secondary stats are far from exciting as his K rate (6.6) and BB rate (4.3) have inched closer together. Ted Lilly has always been a favorite quietly good fantasy arm, but he is now 37 and coming off a shoulder injury. Chris Capuano is probably the most deserving of a spot based on his 2012 performance. He had a 3 to 1 K/BB rate and an ERA of 3.75. Then there is Chad Billingsley. He seemed to finally make some progress last year, but his elbow is now hanging by a thread. I would be shocked if he came close to 30 starts and he is about as risky a pick as you can make. When you consider he has really never lived up to expectations, there is little reason to put your season in jeopardy. The worst part is there may be no clarity on the back end of the Dodger rotation until after your draft so you may have to avoid these last five arms until the waiver wire activates in your league.

BULLPEN:
Kenley Jansen is a beast and now that his irregular heartbeat is under under control he may challenge Craig Kimbrel for the top closer spot. He won't match him, but he does have the strikeout totals to be a dominant fantasy closer. Should he falter, Brandon League has the experience to step in and be his usual mediocre self.  Jansen won't have a long leash with the money they have spent, but he is clearly the better fantasy play of the two.

OFFENSE:
A.J. Ellis was a pleasant surprise at catcher in 2012, but at 31 there is no upside. His average and on base skills may hold, but the power will not and he is someone you should steer clear from in your draft. Adrian Gonzalez has been an enigma recently and perhaps the change of scenery will do him some good. His most productive years were in the NL West so there is reason to think the old familiar will help regulate him back to the 30/100 threat we remember. Gonzalez has a fantastic shot at outperforming his draft slot. He is one of the rare 3-4-5 capable players (that's .300BA/.400OBP/.500SLG). The fact he qualifies in the outfield in most leagues raise his value even more since it will allow you to draft the best players that are available and shift Gonzalez around to improve your team. The combo of Mark Ellis and Skip Schumaker have no fantasy appeal. Hanley Ramirez at shortstop at his best is a first round talent. The problem is we have seen his best in quite some time. His attitude and concentration issues are well documented, but as he enters the prime of his career with real lineup protection he is worth one more early pick based off is position eligibility and flexibility (3B and SS eligible in most formats). Don't expect 30 homers again, but maybe a nice 25/25 season would wash away the sins of old in the minds of fantasy owners. Like Ellis, Luis Cruz is another career minor leaguer who played way over his head and should be avoided. When he crashes back to Earth, I would expect Hanley to slide over to SS and Dee Gordon to get one more shot to show his dynamic speed. This time around he has to realize, speed is only an asset if you can put the ball in play. Matt Kemp is one of the few 40/40 threats in all of baseball. Despite his injury riddled 2012 campaign, he remains a first round talent who should have a bounce back year. He is a franchise fantasy stud and across the board contributor. Andre Ethier is one of the most overrated fantasy outfielders in the game. He always has one big hot streak in him, but the fact is he is woeful against left handed pitching (.238 BA/.649 OPS for his career vs LHP) and that is not going to change. Let someone else take the bait. He is a glorified platoon player. Lastly we have Carl Crawford, who has left all of us speechless the last two seasons. He is in his prime and should be posting the best numbers of his career, but instead injuries have rendered him nearly undraftable heading into the 2013 season. You can give him the benefit of the doubt and say injuries, big contract, Boston were all to blame for his demise. But most of his value is tied to his legs which are now 31 years old. Crawford has never hit for a lot of power, and now he is switching leagues for the first time. He is worth a flier in the second part of your draft, but chances are another owner will draft him well before that. It would asking a lot for him to be an "elite" outfielder again.

The Dodgers are relying on a lot of bounce back years and some players who performed well above expectations to repeat their surprising success. You will also have to take a leap of faith that these players will perform to their standards. The facts are, outside of Kershaw, the entire team comes with varying risk for your fantasy team and it is unlikely that everything is going to break right here. Calculate the risks you are willing to take in your draft and try not to succumb to the hype surrounding the money train being driven through Chavez Ravine.

For more complete player reviews check out the FANTASY BASEBALL BLACK BOOK 2013 EDITION available on amazon for Kindle and iPad.
Posted by Unknown at 10:34 PM