The Cardinals continue to be a model organization in Major League Baseball. They foster their young talent, are not afraid to bring in strong veterans and continuously turn around lost careers. Even after losing Albert Pujols to free agency they made the playoffs and look poised to compete once again for the NL Central crown. The one mainstay in St. Louis has been pitching. Derek Lilliquist has picked up where Dave Duncan left off and the Cards' deck is stacked with arms. Add in the emergence of Allen Craig and rebirth of Carlos Beltran and the redbirds a formidable squad in 2013. 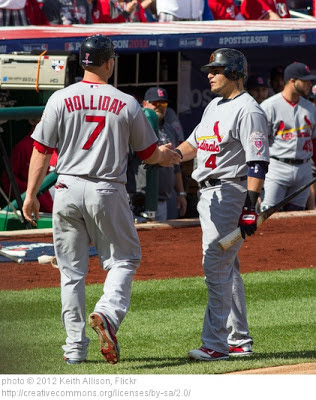 ROTATION:
A second year removed from Tommy John, Adam Wainwright should take another step closer to being his old self. He was better than his final stat line suggested and had a lot of bad luck in 2012. Wainwright was prone to the "one bad inning" that cost him wins and inflated his ERA. The good news is his K/9 (8.3) and BB/9 (2.4) were right on target so the rest should fall into place this season. He can still perform like a fantasy ace, but is better suited to be drafted as a high end #2 starter. Jaime Garcia elected to rehab his ailing shoulder and avoided surgery, but there is a very good chance he may end up on the DL. His skills are good, but not good enough to invest in him on draft day. You can find his 13 wins and 150 K's with far less risk. In his first full season as a starter, Lance Lynn was all star quality. He did have the typical second half fade common to young pitchers. However, he was still solid enough to warrant a lot of respect in 2013 drafts. He is still underrated and should be good for 15 wins, 180 K's and an ERA of 3.75. Lynn is a sneaky good back end of the rotation fantasy arm. Jake Westbrook has never been a good fantasy play due to his below average secondary numbers. With Chris Carpenter likely out of the year, Shelby Miller and Trevor Rosenthal will battle for the remaining rotation slot. Miller righted the ship late in the year and is the #1 young arm in the Cardinals system. He has big upside in keeper leagues. Don't sleep on Rosenthal though. He throws hard and has excellent strikeout numbers. If you can grab them both in the draft and stash them, they will pay dividends in 2013.

BULLPEN:
Jason Motte is entrenched as the closer and his sub 3.00 ERA and 86 K's in 72 innings make him a solid reliever in all leagues. He is getting better every year. It would take a catastrophic run of bad luck or injury to unseat him from the role.

OFFENSE:
Yadier Molina has made himself a fantasy stud in the last two years proving yet again a player's prime is 29. His career high 22 homeruns an an .874 OPS make him a top fantasy catcher in 2013. he even stole 12 bases for you roto fans. You can argue he is the safest option at the position as well when you consider the injuries that have befallen the top 5 catchers recently. Allen Craig finally has a home at first base. Now he has to play 150 games in a season. It can be dangerous to project a player's numbers over a full season, but Craig has slugged .518 over his minor league career and hit over .300 so it appears safe to say Craig is for real. Once the elite first basemen are gone, Craig is an excellent selection. Daniel Descalso might be the second baseman on the depth chart, but it is common knowledge the Cards want Matt Carpenter to win the job. If he does, Carpenter may be the steal of the draft for middle infielders. he has great on base skills (.408 minor league OBP) and a bit of pop too. Watch this spring battle closely. Rafael Furcal is past his prime and never healthy so don't even bother. David Freese is a 80/20/80/.300 player as long as he stays on the field. That has been his biggest drawback, but he is in his prime and a great middle round third base option if you miss out on the top guys. Carlos Beltran had a fantastic season (32HR/87RBI/13SB), but it is worth noting he (his OPS dropped from .924 to .742 after the break). If he gets off to a Jon Jay will hit for a high average and score runs if he land at the top of the St. Louis order. He has little pop and is really more of a bench outfielder in fantasy terms. Matt Holliday is still one of the most underrated hitters in the game. He may not cross 30 bombs anymore, but he will give you outstanding production in every category and be a monster in points leagues. Guys with his OPS create havoc in fantasy baseball and he will be cheaper than the Josh Hamilton's of the world.

The Cardinals have an above average roster and a plethora of underrated fantasy stars. They will play the game right and play hard. Believe it or not that does translate in the box score and into your fantasy bottom line. Guys who hustle, take that extra base and make those key pitches can be the difference of you winning or losing a fantasy match-up. There is a lot to like here all over the diamond and the price tag will be very reasonable.

For complete player profiles check out THE FANTASY BASEBALL BLACK BOOK 2013 EDITION on Amazon for Kindle and iPad.
Posted by Unknown at 8:20 PM