The Tigers had a great run, but hit the skids in the World Series against a hot San Francisco Giants team. This off-season the Tigers added Torii Hunter's leadership, kept Anibal Sanchez from leaving via free agency and jettisoned the antics of former closer Jose Valverde. Oh, and they are getting Victor Martinez back healthy to hit in the five hole of an already formidable lineup. The Tigers have the best hitter and pitcher in the game on their roster and look primed for a return trip to the World Series in 2013. If you are looking for fantasy stars, the Motor City provides some of the best you will find. 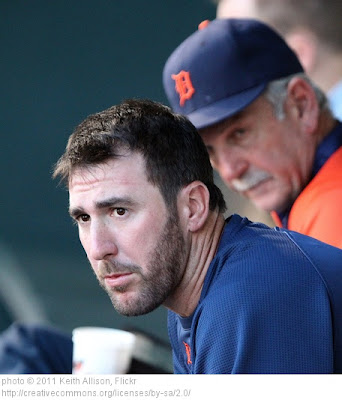 ROTATION:
Justin Verlander may not have matched his 2011 CY Young/MVP season, but that was a once in a generation performance. Verlander's ability to pace himself and actually get stronger as the games goes on allows him to pitch deep into games and accumulate stunning statistics. He should make a run at 20 wins again with 240K's, 240IP, a WHIP around 1.00 and an ERA near 2.50. He is the best pitcher in the American League and is in his prime (30). Verlander is worth every dollar. Max Scherzer finally put it all together after teasing fantasy owners the last three years with glimpses of brilliance. His 11.1 K/9 led the league and he won a career high 16 games. Scherzer was dominant in the second half (2.69 ERA opposed to 4.72 before) and is entering his prime (28). The only real concern is the shoulder issue that plagued him at the end of the season. As I said with Gio Gonzalez last week, you can't draft a guy with one "ace-like" season as your #1 fantasy starter. If his health checks out this spring he is a strong #2 with big time strikeout ability. One of my favorite underrated fantasy arms is Doug Fister. His totals never blow anyone away, mostly because he seems to miss time every season. Fister is a terrific control pitcher who will occasionally drop a big strikeout game on you. If he can make 30 starts, Fister will easily win double digit games and give you sparkling WHIP and ERA numbers. He will be undervalued on draft day and will outperform many of the arms that will go before him. Anibal Sanchez showed he was ready to pitch in big games and as just a cog in a great rotation there is little pressure on Sanchez. The run support that eluded him in Miami should allow him to continue to grow and mature as a pitcher and he could certainly take another step forward in 2013. His strong September (2.43 ERA 37/5 K/BB in 40 IP) and playoff performance makes him a pitcher trending in the right direction. Rick Porcello simply does not strikeout enough guys to warrant fantasy attention. His high ERA and WHIP can really hurt you and there have been no signs of improvement. You should be rooting for Drew Smyly to beat him out for the fifth starter job.

BULLPEN:
This is their only weakness. Rookie Bruce Rondon is getting the first crack at winning the job. Although he throws hard, he has no track record closing games at the big league level and he has trouble locating. Being "effectively wild" does not equate to him being a sure thing. If Rondon fails, Joaquin Benoit, Phil Coke, Al Alburquerque, and Octavio Dotel could all be in the mix for saves. The Detroit bullpen looks like one to avoid in your fantasy leagues on draft day. Instead monitor the situation closely and vulture saves from the waiver wire when the opportunity presents itself.

OFFENSE:
Alex Avila was disappointing after a breakout 2011.His power and average vanished making him hard to predict in 2013. In AL only leagues, he deserves another chance, but in mixed leagues there are plenty of guys with better track records. He is too young to write off as a one year wonder, but it is hard to justify anything more than a late round pick. Prince Fielder is the #1 fantasy first basemen in my book. He plays everyday making him more durable than Joey Votto and he is younger than Albert Pujols. After the expected adjustment period to switching leagues, Fielder was a monster after the break (1.006 OPS). Fielder is well protected and is poised for a power spike in year two as a Tiger. Omar Infante had a surprising early power surge, then reverted to his usual self. He is better suited to a utility role, but will be the everyday second basemen for Detroit. He has minimal value as a fantasy bench player, but you should avoid drafting him as a starter (career .712 OPS). Then there is Mr. Triple Crown Miguel Cabrera. He is the best hitter in baseball and plays third base. This makes him easily to top offensive player on the board in 2013 drafts. He may not give you steals, but to take an outfielder over Cabrera is foolish considering the plethora of speed and power combination that exist there after the first round. In an era of baseball where power is scarce, Cabrera has 40/120 power with a batting average around .330. He is in a league of his own and at the peak of his production. Jhonny Peralta is back to his good year/bad year ways. Yes, he does have 20 homer potential at a weak position but he there are no guarantees when you draft him. His down 2012 will make him very inexpensive on draft day. Cheap power from middle infield should never be completely ignored. If you are looking for under the radar outfielders, look no further than Austin Jackson. After a bad 2011 season, Jackson showed great progress in 2012. His homeruns (10 to 16), batting average and OPS (,249 to .300) (.690 to .856) all increased. His steals did drop from 22 to 12, but anytime a player cuts down on his strikeouts, increases his walks and his power numbers simultaneously that is something special. Jackson is poised to lead-off for the Tigers and will score 100 runs without breaking a sweat. Torii Hunter still has something left in the tank and a chip on his shoulder after the Angels let him walk. He hit .300 for the first time in his career which is making up for his decline in power. Hunter is a nice late round outfield pick in deep leagues and is hitting in the 2 hole so he should see a healthy diet of fastballs. Andy Dirks will get the bulk of the left field at bats since he will face RHP in a platoon. As nice a year as he had in 2012 (.322 8/35 in 72 games), unless he wins the job outright Dirks is still a waiver wire bat. Brennan Boesch, Quentin Berry, and Avisail Garcia will cut into his time. Victor Martinez looks healthy and will be the primary DH this year. In leagues where he qualifies at catcher he is a huge advantage since he will receive more at bats than your regular catcher in fantasy. He may take a while to get comfortable after missing the entire 2012 season, but Martinez is a professional hitter who will give you 20+homers, 90 RBI and solid batting average. Don't be shocked if he actually catcher a few games as the year goes on. Jim Leyland will get his bat in the lineup during inter-league play any way he can.

The Tigers have a stacked rotation and a powerful offense. Their undoing could be their bullpen. It may cost the starters some wins and could become a weight on the offense to feel they must overcome. Still, the Tigers  offer big time talent and some great value in the mid-late rounds of your draft.

For more player profiles check out THE FANTASY BASEBALL BLACK BOOK 2013 EDITION on Amazon for iPad and Kindle.
Posted by Unknown at 12:00 AM