Best Bang for Your Fantasy Buck

You can't fill your fantasy roster with stars at every position. This is a basic fact of life. The trick with being successful is knowing where to look for value whenever possible. Understanding how to spend your fantasy dollars wisely or how many rounds you can wait to fill a certain position is what separates the winners from the losers. Let's take a quick look around the diamond and give some press to the "not quite superstars" of the game. This bunch won't fit in your "sleeper" bag, don't have that "new rookie smell" and they certainly will not be off the draft board very early. They are capable of performing admirably at their given positions and should be on your radar when you miss out on your plan A...or even your Plans B and C as well. 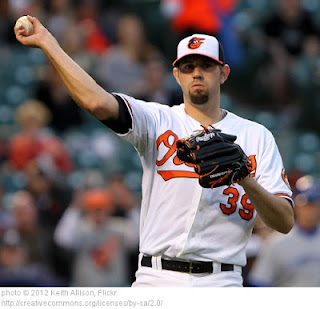 SP Jason Hammel BAL
Jason Hammel was having a breakout year before an injury cut into his season. He was the Orioles' ace showing the best ERA (3.43) and strikeout rate (8.6 K/9) of his career. He is in his prime (29) and should be 100% in 2013. Let's not forget he was a Rays farmhand and that organization knows how to produce pitchers. He was lost in Colorado the last few years and in Baltimore he is finally pitching to the ability he showed in the minor leagues. There may not be a better bang for your buck as far as impact arms for 2013.


C Jonathan LuCroy MIL
His 2012 season was cut short by a freak accident that broke a bone in his hand, but LuCroy was hitting .320 with 12 HR and 58 RBI at the time. Now it is dangerous to project a complete season for a player after a successful sample size, but he was a career .838 OPS guy through his minor league career with a .299 BA, so there is a very good chance what we saw last year was the real deal. His overall stat line may not jump off the page for your average fantasy owner. Take advantage of that fact and hope that he reaches 140 games. He could put up the same numbers as Yadier Molina or Miguel Montero with a much cheaper price tag.

1B Ike Davis NYM
We all know 1B is a great place to find power production. After the big dogs are off the board, you still need to fill a CINF/DH or UT slot and Ike Davis is a great value pay. He missed 100 games in 2011 and had a bout with Valley Fever in 2012. Those two factors were to blame for his horrendous start last year. However, Davis rebounded to hit 20 homers after the break, raised his average to a respectable .260 and his OPS up to .888. Now you can draft Mark Teixeira in the early rounds. But if you are looking for a .260 hitter with 30/100 power stats, why do that when Ike Davis can provide the exact same production at a fraction of Teixeira's cost?

2B Neil Walker PIT
It was a quiet improvement for Walker in 2012, but he too ended up missing time on the DL. His 14HR/69RBI seem mediocre, but if he played in 158 games (instead of 129) those numbers jump to 17/85. That would have tied him for third at the position in RBI with Aaron Hill and put him in the top ten in homeruns for all second basemen. Walker is never going to carry your fantasy team, but he can offer you steady production in the middle infield with decent power and double digit steals to boot. He is very under the radar and under-appreciated.

3B Todd Frazier CIN
In the best rookie class since 1986, Todd Frazier was almost a forgotten man. In 128 games, Frazier hit .273 with 19 HR and an .829 OPS. Like most talented rookies, he enjoyed early success and struggled as pitchers began to make adjustments. The good news is that he has a clear path to start at third for the Reds with Scott Rolen out of the picture and his 2012 stat line is in line with his minor league history. Frazier is a good athlete and a hard worker so there is reason to believe he can improve or at least hold this level of production in 2013.

SS Eric Aybar LAA
Aybar had a strange 2012. He started off slow, got hot, got hurt then came back and was on fire down the stretch. What he lacks in power he makes up for in steal and average. Where he hits in the order will impact his value, but at a weak position, Aybar is does a little of everything. I particularly like him in points leagues because of his K/BB rate and the fact he hits a lot of doubles and triples. He can be a real annoyance to your opponents in that style league and he should be in your radar in all formats.

OF Michael Morse SEA
The outfield position is so deep that you can afford to wait and let the draft come to you (unless your league plays 5 OF'ers, then you must draft at least one early). I can't think of a more undervalued power outfield bat than Michael Morse. There are many reasons why that is the case. He was a late bloomer, was slowed by an injury in 2012 and is now stuck back in Seattle. But the guy is at least a 25/85 bat with upside for more. He is basically a forgotten man in 2013 drafts and that is a mistake. If you are looking for some thump in the later rounds, Morse is a steal.

So there you have it. Nine players who play in obscurity, are overlooked, missed time, are undervalued or simply not sexy enough for fantasy "experts" to talk about. When all is said and done, these fantasy role players will provide stability and value. For more on these players and all of your fantasy baseball needs, check out THE FANTASY BASEBALL BLACK BOOK 2013 EDITION on Amazon for iPad and Kindle.
Posted by Unknown at 10:08 PM