So Your Draft is Over...Now What?

You prepared, you labored, you made spreadsheets and now the draft is over. If you did it right, you prepared for weeks and after a few hours you are now sitting on a team that is hopefully a winner. But it could be a loser in disguise. You may not recognize which you have since everything looks good on paper in April. "If this guy stays healthy", "If this guy bounces back", "If this guy can just stay out of prison"...etc, etc. What you need to do now is try to make an honest evaluation of your roster and address your shortcomings as early as possible. The great thing about THE FANTASY BASEBALL BLACK BOOK 2013 is that it is the only ALL season companion guide. It takes you through trades, rookies, transactions, lineup management and so much more. Draft guides leave you high and dry after the last pick is called.

So where do you begin now that the draft is over? I will attempt to show you the path.

1. DISTANCE YOURSELF
The first thing you need to do is take a long, hard look at your roster. Put yourself in the mindset that your team is owned by a fellow league mate. Would you fear this team? If the answer is a true and honest yes, then don't tinker too much. There is often a tendency to start to doubt what you have and you may start to make some drop/adds you may regret later on. Even if you are genuinely pleased with your squad, try to find your potential disappointments and try to develop a plan should they not work out how you envisioned.

2. HIT THE WIRE
If the answer is no, then this is the time to overpay with your FAAB or hit the waiver wire hard. The most fruitful waiver wire period is always the weeks leading up to the season. Fifth starters are named, everyday jobs are won and injuries lead to openings. There are even undrafted players that may have been wrongfully overlooked. Many owners are content to draft and just sit, but the keen owner is watching closely and scooping up useful odd and ends that can get you off to hot start. 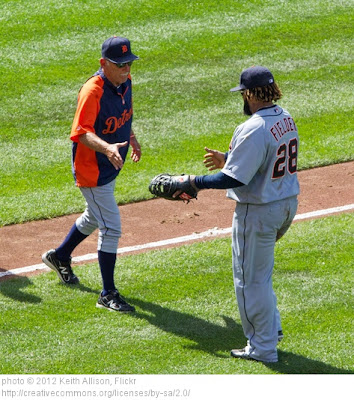 3. EXPLORE TRADES
It is nearly impossible to make a deal in a league this early. What you can do is start to target your opposing teams needs and see where they are lacking and where you have a surplus. You can also earmark teams you think may be weak and after they get off to slow start, try and offer them a lifeline that can honestly help them improve and benefits you simultaneously.

4. DON'T OVERREACT TO SPRING
Spring numbers are skewed for a myriad of reasons: split squads, minor league talent facing major league talent, strong wind gusts, smaller ballparks, pitchers working on one single pitch...the list goes on forever. The important thing to look for is health not necessarily performance. Just because a guy is lighting it up in spring does not mean it will carry over. Brandon Belt has murdered spring pitching three years running and has yet to translate that to the regular season. Francisco Liriano was lights out last spring and looked like an ace reborn. He went in the tank immediately. On the flip-side, veterans tend to sleepwalk through spring, so don't think they are heading for their demise just because of some bad outings or an 0-10 drought.

5. APRIL SHOWERS
Leagues are not lost or won in April. If you get off to a slow start it's ok. If you have players with real track records they will bounce back and have corrective performances. Conversely, if you get off to an unbelievably hot start you may want to look into selling high on some players that are clearly playing over their head. Remember when Omar Infante had 5 home runs in 18 April games last year? Well he hit 7 the rest of the year. That is exactly what I am talking about.


The season is long and favors the prepared and the persistent. Stay on top of your team, stay on top of your league and by all means watch as much baseball as you can. The eye test still holds many answers to questions that stats sometimes leave incomplete.