What We Learned From Opening Day


It's a new season and in major league baseball some things change and others stay the same. Opening Day is a national holiday to baseball fans around the country and in fantasy terms we saw a glimpse into the 2013 season that lies ahead. Here are some quick observations and notes from the first full day of baseball.

CHC vs PIT
Jeff Samardzija is a talented arm, but the Pirates are still a swing and miss club that have trouble with power pitchers. Carlos Marmol is a nightmare and it is only a matter of time before Kyuji Fujikawa steals the role from him at some point. A.J. Burnett is still a different pitcher in the NL (10 K's today). Anthony Rizzo is a true slugger in the making.

SD vs NYM
Colin Cowgill showed to be the scrappy lead off man with pop I have been trumpeting as a deep sleeper for the last 6 weeks. David Wright seems to be bringing back his base stealing which would be a huge boost to his value. Ike Davis is a slow starter (Golden Sombrero today 4 K's). Jon Niese is a maturing pitcher who can be a solid middle of the rotation fantasy arm. The Padres have no pitching and nearly as little offense, but Yonder Alonso's blast gives hope that he can improve on his power numbers in 2013.

COL vs MIL
John Axford still can't close out games. Aramis Ramirez may be over the hill, but is still an RBI machine. Jonathan LuCroy is an underrated offensive catcher. Nice to see Cargo and Tulo hit a little on the road for a change. 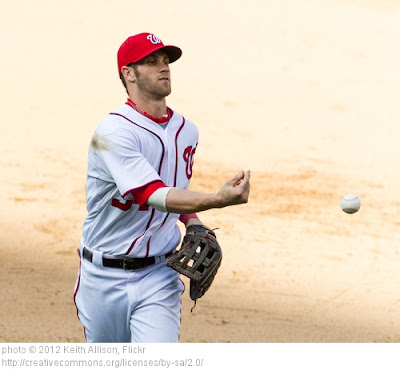 MIA vs WAS
Bryce Harper is everything you want him to be and the spotlight doesn't scare him. He is becoming a "must watch" every at bat. His two solo blasts were all Stephen Strasburg needed to shut down the Marlins, who make the Padres look like the '27 Yankees.

BOS vs NYY
The Yankees are old, slow and are in real danger of falling behind in the AL East. Jon Lester is still capable of being a front end fantasy starter and tales of his demise were greatly exaggerated this off season. Sabtahia will be fine, but he has certainly begun the downward slope of his career.

STL vs ARZ
Ian Kennedy's down year just lowered his draft value and if you bought low on him in your draft you may have gotten a steal. Gerardo Parra deserves a longer look in the D'Backs outfield. Adam Wainwright still has awful luck. It will straighten out in 2013 for him at some point.

SEA vs OAK
Felix Hernandez will continue to get little run support and there will be many more weeks where he will give up 2 runs or less and lose.

PHI vs ATL
Chase Utley is not done yet and is showing why players in a contract year are great to own. Freddie Freeman is the real threat in the Braves offense despite all the Upton brother hype.

LAA vs CIN
Ernesto Frieri is the best option the Angels have on the ninth and should be able to hold off Ryan Madson whenever he returns. Johnny Cueto proved why you ignore spring stats for established pitches. Ryan Ludwick is not long for left field and his injury is the first sign that Billy Hamilton will be up sooner than later in Cincinnati.

DET vs MIN
Justin Verlander  can dominate even with -24 degree wind chills. Aaron Hicks welcome to the big leagues son (0-4 3K). Don't feel bad kid, it gets a whole lot easier than facing Verlander in the AL Central. The Tigers bullpen is definitely going to run by committee, but the smart money is on Al Albequerque's heater eventually getting an extended look.

KC vs CWS
Chris Sale is dominant pitcher, but watching his delivery and frame it is hard to imagine he will hold up for 200 innings in 2013. James Shields is going to have a tough time finding victories in his new home.

SF vs LAD
Matt Cain will always have a hard time winning twenty games until the Giants offense starts to show more pop. Clayton Kershaw is the best pitcher in baseball right now and his shutout should be one of many this year.