Real and Not Real

The season is still young, but already there have been some noteworthy starts that have caught the fantasy world by storm. As great as a April is, it can often be forgotten by the dog days of summer. It is important to differentiate between who's stats are for real, and who the pretenders are so that you can sell high before the market correction comes crashing down upon you.

Matt Moore SP TB
In the 2013 Fantasy Baseball Black Book, I lauded Moore as the next big fantasy ace even though many of my peers soured on him after his first full season. It was shortsightedness on their part to disregard a Rays pitching prospect with a minor league K/9 ratio of 12.7 over 497 IP. That is the stuff aces are made out and the only thing that held him back was his BB/9 rate of 4.1. Now, this year's rate is 4.8 but that is inflated die to one frigid, rainy game in Texas where he walked six. All other games he has walked 3 or less. His H/9 rate of 3.5 is insane and so is his talent. It is unlikely you can acquire Moore, but if you can somehow put a package of players together, he is capable of sustaining fantasy ace status all season long. If you followed the Black Book's scouting and drafted him a round or so earlier than projected, you are enjoying a emerging force to be reckoned with. 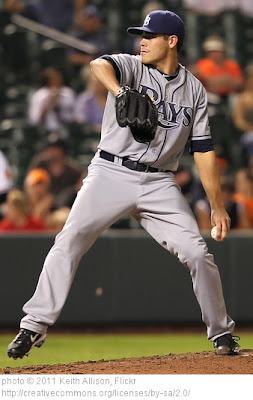 Paul Goldschmidt 1B ARZ
Despite his high strikeout totals, Goldschmidt's career minor league numbers showed a strong on base percentage (.407) and above average power (.620 SLG%). His .329/.425/.557 slash through the first few weeks of the season is the player he was projected to become and he is still just 25. He should be a middle of the order presence for years to come and his ballpark plays well into him being a 30/100 player for quite some time. If he should ever cut down his strikeouts he could become a superstar. For now in one year only leagues, he should be a strong corner bat.

Coco Crisp OF OAK
Let me start by saying I love Coco and I have owned him many years including this year. He does a little of everything and can have very productive bursts. His April is just that, a very productive burst. Crisp does not have this kind of power (5 homers already) and has always had nagging injuries. When you consider his age (33) and his fragility, there is no way Crisp can keep up this pace. He is still a very useful cog, but if he is running your fantasy machine right now your team is in trouble.

Brandon Crawford SS SF
You can easily argue Crawford has been a top 5 shortstop over the first month of the season. He has scored 15 runs, driven in 10, slugged 4 homers with a .320. His .966 OPS is off the charts and way off from his career .736 mark as a minor league player. Could be he making progress as a hitter? Sure. However, he is still playing way over his head and the power level is in no way sustainable. If you own Crawford and have depth at short, now is the time to deal him. I would rather roll with an Eric Aybar-type the rest of the season. The bottom is going to drop out very soon.