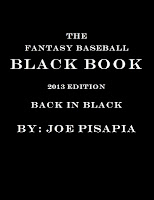 It is understandable that the Reds see value in having their best arm impact 180-200 innings in a season as opposed to just 71. However, baseball has evolved over the last decade and the 71 late innings Aroldis Chapman dominated last year were the thing that separated the Reds in the NL Central from the pack. The reason Chapman ended up in the bullpen in the first place is because he lacked control and consistency with his secondary pitches. A fastball like Chapman’s is effective because hitters don’t get three looks at it in a game.

As I discuss thoroughly in The 2013 Fantasy Baseball Black Book, I whole heatedly believe that closers are the most interchangeable players in the game. But when a player is so far and away dominant in a role, there is zero reason to take him out of it unless he begins to falter. From a fantasy standpoint you have to hate this for two reasons: 1) Chapman will certainly be on an innings limit if the Reds stick to the program. 2) If he fails as a starter, he runs the risk of losing confidence. He may not transition back into the old role as if nothing happened. The shuffling back and forth can have a negative effect. 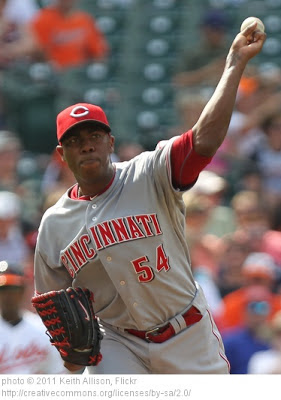 If you need recent examples of where this thinking went awry I give you: Neftali Feliz, Joba Chaimberlain and Daniel Bard. Feliz was a dominant 9th inning guy but the Rangers were insistent that his arm was “too good” to leave for one inning at a time. His small frame instead wore down quickly and the transition back and forth as they changed their mind on how to use him lowered his confidence and eventual injury struck. Now, he is a non factor and will miss a whole season due to Tommy John surgery. Next, there is Joba. When he first came up into the Yankee pen he was being heralded as the heir apparent for Mariano Rivera.  His secondary stats as a reliever (0.75WHIP, 4.5H/9, 12.8K/9) were eerily similar to those of Chapman in 2012. The Yankees wanted Joba to get more “inning exposure” and exposed he was indeed. Now, he is another non factor. His career ERA is a full run higher as a starter (4.18) as opposed to a reliever (3.18). Perhaps even more interesting is the difference between his WHIP: 1.48 as starter versus 1.18 out of the pen. Lastly, there is Bard who after one bad stretch was yanked from the pen and thrust into the rotation. The last time Bard was a starter which was in A ball where he posted an ERA of 7.08. As a starter in 2012, his ERA was 6.22.

Some guys are made for the pen and some are made for the long haul. It is not impossible that Chapman could have success like Chris Sale who was a bullpen convert. However, Sale had arm issues midway through last season and is certainly a prime breakdown candidate in 2013. The moral here is if a player is dominant leave him alone and let him dominate.

In four spring training innings Chapman has given up 3 hits, 1ER, 2BB and 1HR. As he stretches out over March and into April it will be interesting to see how his numbers adjust. I am personally not willing to pay anything close to big money to find out how Chapman’s transition goes and neither should you. If he falls in your lap as a back end of the rotation starter then maybe.He is also intriguing as a sneaky play at RP since he is eligible there. However, it is far more likely a fellow owner will draft him well beyond his reasonable value on the off chance he becomes an ace.
Posted by Unknown at 8:57 AM