Yes, a 24 team dynasty auction...head-to-head points...23 man rosters...10 minor league slots. If ever there was a monster of a draft it is this one. I enlisted the help of a good friend who I have been playing fantasy baseball with for 15 years to assist in the draft process. We concocted a strategy and a few "dummy" budgets to work off and adjust over the eight hour marathon. Most importantly we targeted "MUST HAVE" positions in a league of this depth. For all the preparation, we were not quite ready for where the elite player salaries would head.

Bidding against 23 other owners caused enormous inflation especially on young players like Trout and Harper who went for $49 each despite only playing one full season and an escalating salary structure of $1 increase year one, $2 year two, $5 year 3 etc. Miguel Cabrera and Stephen Strasburg went for $56 respectively. In a league where pitching points mattered this much, we were not leaving without three top arms. David Price ($50), Cole Hamels ($38) and Adam Wainwright ($32) gave us arguably the best front of the rotation in the league. We paid for it, but our goal was to dominate on two star weeks from big time arms. AJ Griffin at $13 is our #4 starter and could easily have been a #2 on nearly 1/3 of the staffs in the league. John Lackey ($1) and Zach Britton ($1) rounded out the rotation. 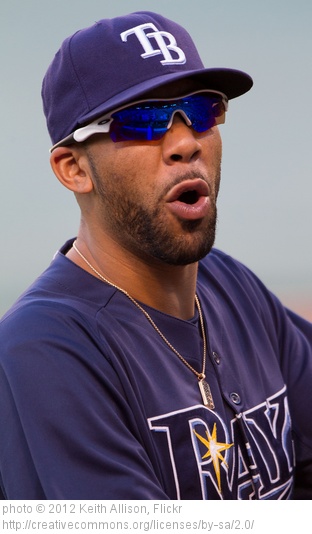 The rules also stated we needed to start two relievers each week. Now the simple math is: 30 MLB teams, 30 closers. In this format where 48 active relievers were active each week so there were going to be middle men and reliever eligible players on the radar. However, with saves and wins both worth 7 points, having two closers was the ideal. When we missed out on Kimbrel ($34), we were able to land Sergio Romo ($15) and Jason Grilli ($10) for a combined $25. It turned out to be a much needed savings.

Our plan was to fill C, 2B and SS and slum in the outfield. Carlos Santana's ($30) 1B and DH time makes him very valuable in a league where the weak catcher pool goes 24+deep. He will get more AB's every week than most other catchers and that matters when you will be scratching for every point. We took advantage of the fact most owners in a dynasty don't like older players, but Chase Utley and Jimmy Rollins ($18 each) can still play and are arguably better than more than half of their position mates. They also went for much less than some players with far less track record or talent. Paying for potential is a dangerous game.

When I said "slum" at outfield I did not think it would be this bad, but if Carlos Quentin ($6) is healthy he could be a much needed power source. Cody Ross ($5) is serviceable and has some pop. The third spot is up for grabs. Rajai Davis ($1) stole 40+bags last year and Anthony Gose ($2) has upside and killer spring stats. Unfortunately, there is a log jam on the Toronto outfield. The plan is for Chris Parmelee ($3) to qualify in the OF by the end of April or get lucky and have Grant Green ($1) come up and play second base for Oakland sooner than later (he qualifies at OF). Until then, we are dumpster diving on a waiver wire that has less meat than a vegan restaurant. No matter. That was the plan and we will find OF eventually.

Our corners are also weaker than we would have liked. We were outbid on many of our choices and had to settle for Adam Lind ($6) and Michael Young ($4). Both are long shot bounce backs, but each have something to prove. Again, just the amount of competition made it tough to get players within a budget of $260. It could have been worse, there are many teams fielding starting rosters with major league role players. At least our low end guys are major league regulars.

Where we succeeded was at the end of the draft. Teams were out of cash and we were able to grab Xander Bogaerts ($2), Byron Buxton ($2), Trevor Rosenthal ($1), Michael Wacha ($2) and Gose ($2) all prior to the minor league draft. Many elite prospects went for big bucks (Profar for $24/Taveras$19). We nabbed a few dirt cheap and can either keep them for a long time, or use them as very valuable trade bait to better our situation. Prospects will always replenish every season with the MLB draft, so I will always entertain offers that help me in the present.

You may look at the roster below and be underwhelmed, but I assure you on paper it is certainly in the top 1/3 or better for the 2013 season (24 teams! Only 6 less than MLB people!). I am always in "win now mode" with an eye for the future. Building a foundation on unproven players can leave you in a state of mediocrity always looking til next year. Give me the playoffs or give me death!

The best advice I can give after this draft for auction leagues is really structure some different budget plans with an idea of what you want to spend, on what and on who. It really does make a difference and will keep you from overpaying or making bad decisions. Avoid getting bored and bidding on just anyone because you have yet to add a player to your roster for 45 minutes. Lastly, be picky. When you have a choice you need to really make informed decisions. There are an enormous number of players I would never dream of having on my team for varying reasons. Target and fight for the ones you like and do everything in reason to draft them.

One last note...the members of this league are some of the best fantasy writers and thinkers out there and I felt the Black Book Crew more than held its own. Now it is up to health and performance.