In this year's Fantasy Baseball Black Book 2013 I recapped the 2012 draft and all of my transactions to highlight the thought process behind the moves. After winning this H2H category 5x5 league a few years back, I missed the playoffs by a single point last year. The agony of defeat indeed. Despite season ending injuries to Tulowitzki, Mariano Rivera, Brian Wilson and Brandon Beachy early on, I was able to fight back and stay competitive. Alas, I came up short.

This season I made a pact to focus on "undervalued" players, whether it be due to age, returning from injury or starting off the season with an injury. The idea being to take advantage of quality players with real track record that were not the "sexy, upside" types. I would instead reserve taking chances for later in the draft much like I did in last year's draft when I drafted Mike Trout in the 25th RD.


My 2013 MIC WARS Team Mantra:
"Youth and skill is no match for old age and treachery."


So here is the happy recap:
RD 1 Miguel Cabrera
I had the 2nd overall pick and in a 12 team league where you start 5 outfielders. It was no surprise to see Ryan Braun go first. No matter, I am thrilled with the best hitter in the game. What he lacks in speed he makes up for in every other category and he plays a tough position. The rest of the 1st RD was a list of the usual suspects. 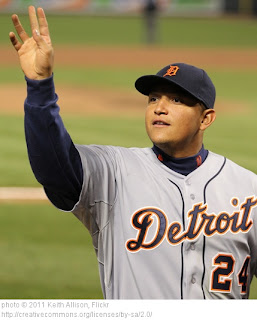 RD 2 David Price/RD 3 Stephen Strasburg
In a league with 9 active pitcher slots, having front end arms is very important. I like to grab two top arms early and force a run on starters if I can. When two top guys go off the board to one team, even expert league owners who despise pitching take notice. With Kershaw and Verlander off the board already (also to one team), the top shelf aces were on borrowed time. Last year my duo was Sabathia and Lincecum. Timmy was a nightmare, but R.A. Dickey off the wire took over his expected production so I was lucky. Price is as good as it gets and the AL East is much weaker than it has been in years. Strasburg has no inning limits and should post incredible strikeout rates and secondary numbers. I think this year's two headed monster is more formidable than the 2013 version.

RD 4 Ben Zobrist/ RD 5 Austin Jackson
Taking Zobrist early was a key. His eligibility at 2B/SS/OF allowed the draft come to me and not worry about filling a specific hole. He is an undervalued player and steady over the last three years. The strategy worked as you will see later on. Austin Jackson was the best all around outfielder in my mind left on the board. He may lack in RBI, but will certainly score 100 runs. He showed increased power and plate discipline and still possesses 30 steal speed. It was between him and Shin-Soo  Choo. I went with the fresh legs and the guy who did not switch leagues.

RD 6 Matt Wieters/RD 7 Joe Mauer
Catchers started flying off the board which was my worst fear. I love to be strong at catcher in this league since you have to start 2 each week. That's 24 active catchers out of 30 MLB teams. Not a good ratio folks! I was lucky enough to get the last two top 5 catchers in my mind after Martinez, C. Santana and Molina went off the board. Posey of course was gone in the 2nd RD. Doubling up on tough positions like catcher or say SS and MINF can put pressure on your fellow owners to reach for players. It simultaneously weakens the talent pool and forces people to over draft lesser talent. Mission accomplished. Both Mauer and Wieters should see DH and 1B time to increase their weekly AB's. That is huge in head-to-head leagues.

RD 8 Chase Utley/RD 9 Curtis Granderson
Utley is playing for a contract and was on pace for a 20/90/20 season. How is that different than say Pedroia, who I passed on to take Strasburg? The answer is 5 rounds different. The track record is there and he has something to prove. Granderson is missing 1/5 of the regular season in this league. Big deal! He should never have lasted til the 9th RD considering he will still probably hit 30+dingers in limited time. I can tread water until he is healthy. I was light on power and Granderson will provide that. The rest of my team hits for a very solid batting average so I can afford his the Grandy-Man's .250 without incident. 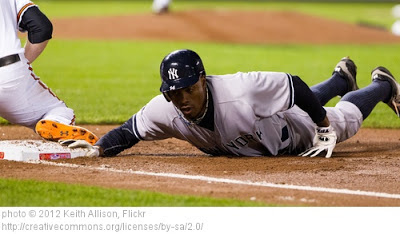 RD 10 Dan Haren/RD 11 Adam LaRoche/RD 12 Lon Lester/RD13 Michael Morse
With Gallardo and Josh Johnson off the board I was looking for two arms that had shown ability to pitch like at least #2 starters in the past. Dan Haren in the NL off a down year and playing for a contract was the perfect fit. Jon Lester has his old pitching coach in the dugout once again and was an ace heading into 2012 drafts. He is pitching for the Red Sox to pick up his big option, so I expect a rebound. This is why you need to understand the game past the numbers. If you had millions of dollars on the line in your job, wouldn't you be focused to perform at a high level?
LaRoche was a 33/100 first basemen last year and was healthy for the first time in years. He is also on a great team with a ton of support. 15 first basemen were taken ahead of him in the draft who had lesser stats in 2012. You take potential, I'll take production. Morse is also incredibly undervalued. So what if he is moving to Seattle. He hit .289 or better three years in a row and has 25/90 potential. After a delayed start to his season by injury, he overcame a slow start to post an OPS of .817 in the 2nd half. Another power bat with a good average.

RD 14 Corey Hart/RD15 Derek Jeter/RD 16 Josh Beckett/ RD 17 Justin Morneau/RD 18 Billy Hamilton
Hart is going to be back by early May and is already ahead of schedule. His '12 slash of 91/30/83 and the fact he plays 1B and OF make him a very valuable piece. Again, people not looking ahead and undervaluing talent. It was between Jeter and Aybar for my MINF slot and when Aybar went I took Jeter with the next pick. All he did last year was score 99 runs with 200 hits, 15 home runs and a .316 BA. Yes, he is coming off an injury, but he is already playing the field. What happened last year again when people said Jeter couldn't get it done? Oh right, 99 runs 200 hits etc. Beckett was reborn in LA and another pitcher who will benefit from the NL switch. Morneau is another guy playing for a new contract with something to prove and an MVP in his closet. Billy Hamiton is my speedster in the hole. He will be up at some point because the Reds are in "win now mode" and he can help that cause. Even half a season should be good for 30+bags. Ryan Ludwick will not hold him off for long.  I wanted Adam Eaton, but he went a few picks before me. Oh well. Hamilton's SS eligibility makes him more valuable. I just have to have patience.

RD 19 Jason Grilli/RD 20 Starling Marte/ RD 21 Rajai Davis / RD 22 AJ Burnett/RD 23 Jason Hammel/RD 24 AJ Griffin/RD 25 Chris Parmalee
So I waited for the C list closers and got Grilli. Saves are saves. Parnell, Perkins, Balfour all went before I could grab them. Then Rondon and Janssen went in succession right before my pick. My only "insert expletive here" moment of the draft. Oh well, I will find saves on the wire or via trade. I have the flexibility to make a move when Hart and Granderrson return or Hamilton comes up. Again, thanks to Ben Zobrist! Starling Marte has 20/20 potential and a starting job. If he doesn't pan out, he gets dropped when my OF gets healthy. If he does, I am in really good shape. AJ Burnett was solid last year and should be serviceable again. Hammel pitched like an ace for Baltimore in 2012. Griffin could be the steal of the draft. he has great K/BB rates in the minors and showed himself well in his 2012 debut for the A's. Parmalee has a good minor league track record and will qualify at 1B and OF once April is over. More roster flexibility.

RD 26 Julio Teheran/RD 27 Andrew Cashner
At the end why not take a shot at two young upside arms well past their hype. Teheran has been lights out this spring and Cashner possesses a dominating fastball. If they pan out they could make a huge impact, if they don't it cost me nothing and they will be dropped. Low risk/high reward. Don't check out late in your draft.

Last year's 24th RD pick was Mike Trout, this year Marte, Teheran, Griffin or Cashner could be breakout stars. The trick is not overpaying to find out.

Perhaps to the naked eye, my team lacks speed. However, last year this roster totaled 136 steals. That would probably be bottom third of the league. But, if Billy Hamilton comes up and steals 35 (very feasible in half a season) that puts me into the top third of the league with 171. Last year's top speed team had 191 swipes. Regardless, I have an offense that has power and a higher batting average than normal as a collective. There are no "empty specialists" with the exception of Rajai Davis, but even he popped 8 home runs in 2012. The pitching staff as two big anchors in Price and Strasburg, two bounce back candidates who were aces just a year ago, and some nice veterans and youth. I am light on Saves, but with the enormous turnover of closers, I will find saves on the wire. They are there every year.

I think I have a top 4 team out of 12 if  I can stay healthy and that puts me in the thick of the playoff hunt. It is all a crap-shoot from that point forward. Just get in the dance, that's the key. In leagues like this, where trades are few and far between and the waiver wire is shallow, the draft is key. I have a foundation of players with track record and I am counting on them performing to their ability. I will sleep better at night with that notion, as opposed to fielding my team with guys who "could" perform well, but have yet to put it all together.