Fantasy Baseball and PED's for 2013

You are crazy if you think the MLB drug policy is not working. You are even crazier if you think guys won't continue to push the envelope and try to use every advantage they can get regardless of the consequence. Yesterday's new Miami clinic information is a surprise, but far from a shock. The accused can deny all they want, but since Rafael Palmiero waived his finger at Congress and tested positive, it is impossible to believe anyone.

From a fantasy perspective here is what you need to know about the accused in 2013 for your upcoming drafts. First of all, 3 guys (Melky Cabrera, Bartolo Colon and Yasmani Grandal) all tested positive last year for PED's, so to believe Alex Rodriguez and Gio Gonzalez as they proclaim their innocence is foolhardy.

Gio Gonzalez is the trickiest here because he was the most valuable fantasy commodity mentioned. After a breakout season that saw him win 20 games, you have to knock him down a few pegs just to cover yourself. If he should fail a test, or MLB suspends him off the evidence it could ruin your season. Luckily, there are plenty of other starting pitchers to chose from. His peak 2012 performance could be attributed to the move to the NL, maturity or just a change of scenery. But with this new link to the Miami Anti-Aging clinic, it is hard not to take this improved version with a grain of salt. 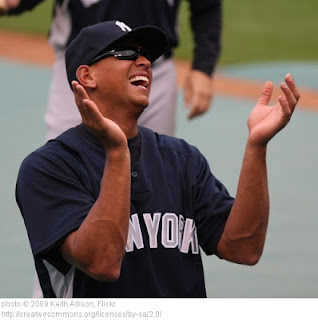 Alex Rodriguez may be the biggest name on this list, but he was already looking at missing a significant portion of the 2013 season anyway with hip surgery. Now, I would be shocked to see him at all in 2013. I would not even "draft and stash" him with a DL slot.

Melkey Cabrera already served his 50 games from last year, but when you consider his attempted cover up of the failed drug test (creating a fake site with his agent with a drug he was "unaware" of) there is no doubt Cabrera would be willing to go down any dirty road again without hesitation. His value has already taken a significant hit in 2013 ADP, and this should knock it down even further. I would draft Cabrera in the later rounds, but not as a starter. He is too dangerous to count on as an active player with this cloud hanging over him.

Lastly, there is Nelson Cruz of the Texas Rangers. He was a curious "late bloomer" a few ago and if you told me he was a PED guy I would not even blink. He has terrific power, but has add plenty of injury issues. Take the DL time and the new suspicion and Cruz also takes a significant hit in fantasy drafts. Like Cabrera, I would only draft him as a reserve. It is unlikely you will be afforded that luxury so be sure to have a plan B.

For more information on these players check out the NEW 2013 FANTASY BASEBALL BLACK BOOK on Amazon.
Posted by Unknown at 4:44 PM