Position Scarcity Matters...Just Not How You May Think (AKA Sirius/XM Fantasy Host Draft Recap)

The fantasy world is mostly composed of two camps: those who believe in position scarcity and those who don't. The problem is they are both wrong. To truly take full advantage of your team's potential on draft day you have to understand and exploit your league format and rules. Position scarcity does in fact matter, but the league itself dictates what those positions that are in fact scarce. This is an easy concept to grasp, yet grossly ignored in fantasy coverage. Most fantasy experts paint with one wide brush and neglect to to cater to specific league strategies as much as they should.

Let's start with my recent performance of the Sirius/XM Fantasy Host Draft. Some of the great minds in fantasy baseball such as Ray Flowers, Kyle Elfrink, Jeff Mans, Nando DiFino etc. and some ex Major Leaguers like Cliff Floyd and C.J. Nitkowski were all participants in this week's host league draft. The format was:

Now, RPV in the Fantasy Black Book tells us that 2 catcher leagues demand a plan as the talent pool isn't deep at all. However, the greatest priority in this format and specific league depth isn't in the infield, it's actually in the outfield. The outfield you say? The theoretical "deepest" pool of talent? Yes. While that may be so, however it's also the most utilized position in this league by a strong percentage. In fact, nearly all of it! I'll explain with simple elementary school math:

Now factor in that the CINF position will be filled mostly with 1B eligible players (not the weaker 3B pool). This means that the 14 teams will likely be starting an OF at the UT spot as well. So let's bump that number up to 80 total active outfielders.

Now consider there are only 90 active outfielders in baseball on a full docket of games. 90+% of the active outfielders on MLB are ACTIVE and IN PLAY in this league every day. That doesn't account for players with OF eligibility being played at other positions like say Brandon Moss nor does it account for platoon players which are a reality at the bottom of this pool. The scarce position here is in fact OUTFIELD. 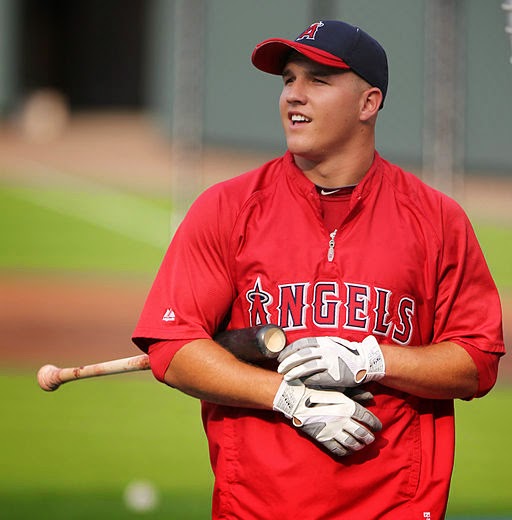 I began the draft selecting Mike Trout # overall and followed with Justin Upton and Corey Dickerson. Taking three big outfielders off the board worked on numerous levels. The first being appropriate ADP value considering each player's performance ability. Next, it "Drowned the Pool" at the position causing other owners to admittedly reach for Jason Heyward, Rusney Castillo, Gregory Polanco etc. sooner than they preferred. In turn, other players fell further than they should back to me. Lastly, I solidified four power bats capable of 30/100 seasons after selecting Prince Fielder to end the 4th round. Power and outfield were the top priority and I executed. I then took Jonathan Lucroy with the next pick to solidify my C1 spot.

Head to head roto formats allow you to stream pitching and patch things together with your rotation through the waiver wire. However, straight season long roto is a different story. Although pitching is deep, it doesn't mean you should take it for granted. Four major categories are up for grabs and prime for the taking. Many rosters had an elite starter followed by lots of filler and question mark arms which actually negates the good work of a true first tier ace. My next 6 picks were pitchers. Yes 6. Gerrit Cole, Jake Arrieta, Garret Richards, David Robertson (nice value after elite closers were gone), Jacob deGrom and Fernando Rodney (to cover save totals). I then stole Cliff Lee as my 5th starter in the 14th rd (#196) and Derek Holland in the 20th rd (#280) with Wily Peralta, Brett Cecil and Justin Masterson (hoping for a bounce back) on the bench for depth. My 6 starting pitchers are all capable of performing like #1-2 starters. As a collective they are stronger than a front loaded rotation with back-loaded junk. That just turns into mediocrity, whereas my rotation is well above average as a collective.

Sure, Lee is a question, but a calculated risk at a very late stage. Holland was a legit #2 in 2013 and showed he was still excellent at the end of last year. Richards will miss a few starts. Big deal. It's a long 6 month season I'll take his 29 starts over most people's #2. Again, this is about the long haul, not winning a week. Cole, Arrieta and deGrom are all trending upward, are healthy and without inning restrictions. Plus, they all pitched like aces in the second half last year and came at #3-4 starter prices.

The next place you can find value is in experience. Every year the sexy new names go way before boring proven veterans and like Mike Gianella from BP says, "Give me the boring old guys in single season and I will win every time." I don't know what Yasmani Tomas will be in 2015. Or Kris Bryant. But I do know what Chase Utley is at this stage of his career and he has been there and done that. I recognize these older players have limitations and health risks, but I made sure to cover my bases on my bench spots.

At the end of it all my roster looked like this:
C1 Jonathan Lucroy (#2 catcher on the board)
C2 John Jaso (give me a C who doesn't catch and plays DH everyday. Low risk and productive!)
1B Prince Fielder (a former late 1st/early 2nd pick not long ago)
2B Chase Utley (proven MLB talent)
3B Aramis Ramirez (ditto)
SS J.J. Hardy (now healthy a lock to rebound to min 15 HR at SS)
MINF Brandon Phillips (with Votto healthy, much less pressure on him)
CINF Trevor Plouffe (far from sexy, but solid and is Aramis insurance)
OF Mike Trout (best in roto)
OF Justin Upton (contact yr, has slugged well over .500 in his career in SD w/ a big sample size)
OF Corey Dickerson (a bright young talent in a hitter haven)
OF Rajai Davis (cheap steals)
OF Coco Crisp (cheap steals)
UT Chris Coghlan (a quietly productive 2nd half of '14 and set to leadoff for Cubs)
Bench Casey McGehee (low power, but still an RBI guy in an RBI slot in the batting order), Wilmer Flores (underrated bat in the minors), Evereth Cabrera (a possible steal in for steals if he wins a job!)
SP Cole, Arrieta, Richards, deGrom, Lee, Holland (Bench: Peralta, Masterson)
RP Robertson, Rodney Cecil

My infield is established major league proven talent. I know what they are and I have room for waiver wire speculations. I also have plenty of infield depth on my bench to cover time missed for aging players. My pitching is built on proven youth who still have room to improve. I didn't pay a premium for speed but acquired enough to certainly be competitive. If Cabrera takes over a starting role or super utility player spot in Baltimore I could challenge for the lead in that category. And everyone should hit for a .260 BA or better with the exception of Plouffe. Batting average is always the forgotten tool.

So there you have it. An exercise in position scarcity.See full draft results HERE.

In the end give me proven production over promise of production and remember position scarcity is always league specific.