The term "expert" gets thrown out a lot when it comes to fantasy sports. I personally prefer the term analyst or author when people ask me what I do. Having played in many "expert" leagues over the years, I've found my private home based leagues to be equally, if not more challenging. However, the expert FLEX LEAGUE draft I had this week was full of some of the best minds in fantasy football and I believe examining this draft can be quite an effective tool in formulating your strategy.

Here's the recap of the first 3 rounds of this 14 team/14 RD draft. I will also highlight some surprises, trends and observations that may be helpful regarding certain players and their status.

FLEX League is 1QB/2RB/3WR/1TE/1FLEX/1Def-ST. (1/2PPR) Looking at the scoring, the 2012 top player was Drew Brees. In 2013, obviously Manning with Brees right on his heels. My thinking at the bottom slot of the snake draft was try to come away with an elite QB (Breese, Manning or Rodgers) and then hopefully a legit RB 1. There are only four top RB's all of which would be long gone before it came to me, but I was surprised that even in a league of experts that mid-low level RB1's who are destined to score 220pts would be valued above a guy like Brees who scored 300+ consecutive years in this scoring system. You take the "potential", give me the points!
Now granted you only play one QB, but the RPV (Relative Position Value/the stat I created and core of the Fantasy Football Black Book) of low end RB1's is already in the negative pool. Not mention the fact so many guys like Montee Ball and Le'Veon Bell still have proven very little in this league. Brees RPV is +14% in this scoring and the RB's available (with the exception of Lynch and Bernard) were -6% to -12%. I would much rather take the ELITE player, and make of the difference in bulk. It's about staying in the "positive RPV" as often as you can. When you consider the pounding running backs take anyway, it seems even more logical. Giovanni Bernard was my target RB at 14th.  A guy on the rise, with little competition for carries or goal line touches and a strong pass catcher. Lynch was my second choice. If both were available I could also create an RPV advantage by owning two RB1's, but I figured this was a pipe dream and the Brees/RB combo would be where I'd end up.
Here's how round one went down: 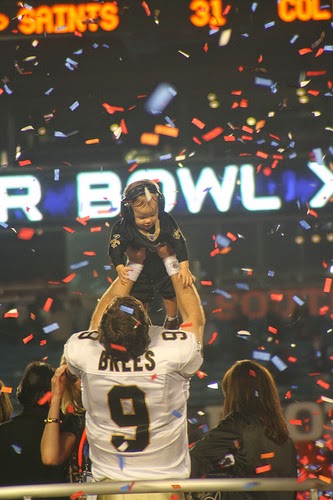 JUST MISSED BERNARD! Clearly what happens when you are drafting in an "expert" league filled with writers for top website and media outlets. There are no sleepers! You will likely be a bit more fortunate in your league. The first round went without any real surprise. Bell is the one guy for me that I am not sold on especially with Blount in Pittsburgh. This was also before his new found legal trouble. Character, may not be a fantasy statistic, but I can guarantee you it can have a massive impact on a player's value.
In a 14 team league playing 3 WR it was not surprising to top wide outs fly off the board. Had it been full PPR I would have been tempted to also dip my toes in the water. To me it was a no brainer to select Brees. Manning is likely due for a market correction, he's another year older (as is Welker) and is also now minus Eric Decker. I think that is a bigger loss than people think, despite having plenty of other options. Rodgers was equally worthy, but coming off the injury I went for the consistency of Brees. To get the #1-2 point getter two years running at the 14th overall pick was an easy choice and I could care less if it turned heads. Now, it was time to comb the RB/WR ranks.

By process of elimination, I chose Lynch. He has been written off before by many fantasy writers only to repeatedly blow us away. Zach Stacy is a nice young back, but I am not sure he is a difference maker. Yes, he had some nice games, but also some real clunkers in 2013. I personally value consistency. That mantra also eliminated Doug Martin from my consideration. Montee Ball has potential, but he has yet to deliver on that promise. Perhaps he will in 2014, but I for one think track record and experience count. So, after being down to Demarco Murray and Marshawn Lynch, Murray's fragility gave out to the consistency of Lynch who also posted a career high in receiving yards last season. Brandon Marshall, Alshon Jeffrey, Antonio Brown and Keenan Allen were all tempting, but the RB pool was about to fall off a cliff. It was an easy decision. Will and Drew got great value in their QB's this round who should easily outscore every other player in this round. I was surprised Jeffrey went over Marshall. Martin to me was the riskiest pick after a disastrous 2013, especially with Stacy and the two elite QB's still on the board. If he was his second RB I would felt better about the selection. Allen and Cobb have the best chance to take a step to the next level.

And now personal preference and risk taking begin. Foster clearly has question marks but as a RB2 you can't blame Jody one bit for taking the chance. Welker does have track record, but also showed decline and wear last year. I would be concerned with him as  #1 WR at this point in his career. Gronkowski clearly a boom/bust player based on his ability to stay on the field, but a great calculated risk in this league depth by John. Incidentally after Thomas went in this round, I took Jordan Cameron with my wrap around pick as the only remaining TE I felt would be well above positive in RPV. The bottom of the TE position is dreadful. Shane Vereen is a sneaky good pick in PPR leagues and Dave was right on that. Jake was willing to go all in on Jennings and with good reasoning. The performance of that whole Giants offense in the new West Coast system will be interesting to see. Michael Floyd to me was the steal of this round for Nick. Everything is set for him to be an elite receiver after his growth in 2013.

So, when it came down to me I needed a WR1 and the choices were dwindling. Floyd or White would have been my preference, but both went right before me. Andre Johnson and Larry Fitzgerald are still useful, but I think both are on a bit of a decline. Edelman is a nice PPR choice, but to me still not a number one. This left me with Hilton and Reggie Wayne. As much as I adore Wayne, T.Y. became Andrew Luck's "go to" guy last year while Wayne was out and you can see the chemistry between the two. Quarterbacks that grow with receivers early on in their careers tend to have special relationships in fantasy and although there is some risk, I think Hilton had the most upside at that point in the draft. 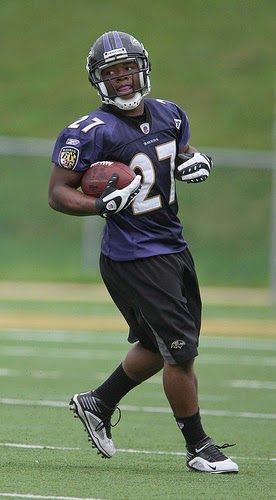 Overall players with some miles on them were slightly undervalued in my opinion. Sure football is a young man's game, but that doesn't mean that experience should be ignored. Maurice Jones-Drew and Steve Smith for instance both fell quite late and considering they are healthy I had no problems scooping them up late in the game. I was also able to nab Ray Rice in the 5th round. Now, I know he will miss 2 games with the suspension and one week for a bye, but she looks to be in great shape and in an era where running back by committee reigns, he has potential to be a bell cow number one at a RB3 value.
Speaking of suspensions, Will took Josh Gordon in the 11th round. Another calculated risk. His reasoning was quite sound, "When I am out of players I like on the board, that's when I take Gordon." A very logical way to look at it without any clarity on the number of games he will miss at this stage.

Dovanta Freeman went 7.6, to John,  Brandin Cooks 6.1 to yours truly and Terrance West 7.10 to Chris were some of my favorite "young upside" picks, so be ready to reach for them in rounds 6-8 in most 12 team drafts.
Ryan Mathews sliding to the 5th round was the biggest ADP slide I saw so it seems folks are still not buying into his 2013 rebound. I for one still see him as a very legit RB2.

For more on RPV read the Free Preview Chapter on the Kindle store of THE FANTASY FOOTBALL BLACK BOOK 2014
Posted by Unknown at 10:45 AM