One of the toughest things to predict in major league baseball is the impact of a rookie. In this year's Fantasy Baseball Black Book 2014 Edition, I talk at length about young players and their place in fantasy. Every new player enters the big leagues under different circumstances, at a different age and developmental stage of their career. Masahiro Tanaka is no different. 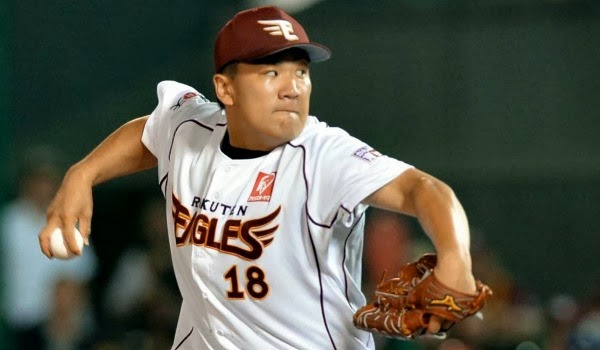 Yes, he is coming over the the states at a relatively young age (26), but he also has a lot of mileage on him. In fact, the last player who has thrown as many innings at this age in his MLB career was Frank Tanana in the early '80's. How's that for a throwback name? The Japanese professional league has greatly improved over the last two decades and has produced many players that have made successful conversions to the American game. It's safe to say at this juncture, if players dominate in Japan they are certainly likely to have mid-to-high level success in the big leagues. But how successful will Tanaka be in fantasy terms? That is the real question.
WHAT THE STATS SAY:
The first thing we need to do is not overrate his recent 24-0 record in his final Japanese season. Records can always be misleading, and wins are a fickle mistress. What it tells us in that Tanaka has poise and above average make-up on the mound. That usually equates to wins in any league and is just as valuable in fantasy as reality. The 24 straight wins however is a fluky stat much like a hitting streak, or scoreless innings streak. There is always an element of luck involved and that is not something you can bank on.
With that out of the way let's look closer into Tanaka's secondary numbers. In seven seasons, Tanaka has posted a 2.30 ERA over 175 games (172 starts). His H/9 rate of 8.1 is good, not great. Tanaka makes up that ground with a microscopic walk rate of 1.9 and a very solid K/9 (8.5). With a career K/BB rate of 4.50, he should be successful in any league. Pitchers like Cliff Lee who allow few walks are usually able to pitch longer into games and don't allow many "big innings" against them. When you can consistently work into the 7th and 8th innings you will be in line for more wins that the average pitchers. Hence the 24 victories. Tanaka's "winning mentality" is a tangible thing.
THE NY FACTOR:
The fact that he plays for the Yankees is not quite the boon it was a decade ago. The ballpark is certainly hitter friendly. The team behind him is one of the oldest in the league and the defense is not exactly first rate. These are all negatives for a control pitcher like Tanaka. The spotlight of New York should not intimidate him considering the national attention he received at home. Having Ichiro and Hiroki Kuroda in the clubhouse should help ease the transition as well. The fact he has an opt out clause after four years is incentive to shine and roll this big time deal into a gigantic payday ala C.C. Sabathia. The AL East is very competitive and there will be no "off days" when it comes to in-division match-ups. All in all, the park and competition will be more of a challenge than the big city lights.
WHERE TO RANK TANAKA:
Now we all know he doesn't have the same arm as Yu Darvish, who is a rare talent. What Tanaka clearly does have is great control. That is a skill worth bidding on. The tricky part is how much do you bid? Like any rookie, Tanaka is more likely to have a better first half, than second half. The league always make adjustments to players the more exposure they get and Tanaka will be no exception. That means if you end up drafting him and he has a great first half, you are wise to consider dealing him at the height of his value in single season leagues before he makes it around a second time.In keeper leagues, the inning totals are a real concern. I would be fine with a short term commitment since he is still very young. In dynasty leagues, he is a riskier investment and I would bid conservatively. The Yankees look at Tanaka as a #2 starter, but in fantasy terms I would only rank him as a #3 at this stage. I would say after C.J. Wilson and Mike Minor, but right around Homer Bailey and Mat Latos. Those are his comp set if you will heading into draft day. As an unproven entity you shouldn't "overdraft" him and expect him to anchor your fantasy rotation. That is asking for too much.There is a good chance someone will over value and reach for him to soon based on the hype, but there is nothing you can do about that. As a #3, I think he could be a very good value in 2014; just make sure you don't put too much stock in this "rookie".
Posted by Unknown at 10:24 PM